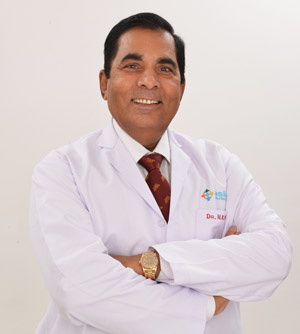 Dr. Narendra Kumar Pandey, D.Sc, FRCS-Edinburgh, FRCS-Glasgow, FICS & FACS is an inspiring figure with an agile mind and keen intellect. His family instilled in him a strong work ethic which combined with his hard work, dedication and high ethical standards have made him an eminent surgeon of great repute. Asian Institute of Medical Sciences is the vision and dream of Dr. NK Pandey who is the honorary recipient of Padma Shri Award for his outstanding contribution in the field of healthcare. He has also been awarded with Dr. B.C Roy National Award, the highest award in medicine instituted by the Government of India for his pioneering work in Video Assisted Thoracoscopic Surgery (VATS ) and  Chest Surgery. He was conferred the Honorary Degree of ‘Doctor of Science’ by Teerthankar Mahaveer University in the year 2013.

Dr. N K Pandey has a vast and varied experience servicing the healthcare sector and has held various prestigious positions during his tenure of service. He was the Ex-President of Association of Surgeons of India (ASI) and is currently a Trustee of the International College of Surgeons – India Section. He was involved in numerous surgical education programs, delivered several orations and lectures worldwide. He served as the Consultant to the National Board of Examinations from 2002-2005 and was appointed as Inspector and Examiner of the same. Dr. Pandey was instrumental in starting several Specialty Diploma Courses at National Board of Examination i.e in Respiratory Medicine Surgery, Intensive Care etc.