Obesity is a condition where a person accumulates abnormal or excessive body fat that causes negative effect on health. For an individual, obesity is usually a result of an imbalance between calories consumed and expanded.

Even as India battles malnutrition, the country has developed another nutritional problem—obesity. In past 10 years, the number of obese people has doubled in the country and According to a National Family Health Survey (NFHS) of 2016, 20.7% of Indian women and 18.6% of Indian men in the age group of 15 to 49 are overweight.

A simple measure commonly used to classify overweight and obesity in adults is body mass index (BMI). BMI is defined as a person’s weight in kilogram divided by the square of its height in meters (Kg/m2).

What is Bariatric Surgery?

When regular exercise and diet are not just enough to cut down the excess fat from the patient’s body, Bariatric Surgery helps individuals to cut down that extra amount of fat with a modified digestive system. Along with the better quality of life, bariatric surgery also increases an individual’s lifespan. Though, Obesity Surgery is considered clinically complete only when accompanied by a healthy diet and lifestyle changes.

Weight loss surgery or Bariatric surgery is a surgery done on the human stomach and intestines for decreasing the food absorbing capacity and restricting the quantity of food intake.

In a normal digestion process, the food first comes to the mouth where it is chewed and broken into smaller pieces. Then the food gets mixed with saliva and also with other enzyme-containing secretions. Then the food goes to the stomach where it is further broken down and dissolved with digestive juices. Here, the food is ready to be converted into nutrients and calories to be absorbed from. The next station is the top of the small intestine, duodenum. Here the food is mixed up with pancreatic juice and bile.

While this is the regular way, with Bariatric surgery, this normal procedure is clinically disrupted so that the food cannot be broken down, dissolved with the digestive juices and absorbed in the natural way.

The amount of calories and nutrients absorbed from the food is reduced which helps in weight loss.

When Bariatric surgery is required

A simple measure commonly used to classify overweight and obesity in adults is body mass index (BMI). BMI is defined as a person’s weight in kilogram divided by the square of its height in meters (Kg/m2). ACCORDING TO INDIAN/ ASIAN GUIDELINES FOR BARIATRIC SURGERY AN INDIVIDUAL WITH BMI of over 37.5 kg/m2 (WITHOUT ANY COEXISTING MEDICAL PROBLEMS LIKE DIABETES, HEART DISEASES, HIGH BLOOD PRESSURE ETC. ) and a BMI of over 32.5 kg/m2 ( IF PATIENT IS HAVING OTHER MEDICAL PROBLEMS) is considered EXTREMELY/MORBID obese and IS A CANDIDATE FOR BARIATRIC SURGERY.

Bariatric surgery (or weight loss surgery) includes a variety of procedures performed on people who have obesity. Bariatric surgical procedures cause weight loss by restricting the amount of food the stomach can hold, causing malabsorption of nutrients, or by a combination of both gastric restriction and malabsorption. Bariatric procedures also often cause hormonal changes.  NO ONE SURGERY CAN CURE ALL THE PATIENTS. SO DEPENDING OF PATIENT PROFILE, HIS CO EXISTING DISEASES, MEDICAL PROBLEMS, DIFFERENT type of bariatric surgery can be offered to DIFFERENT INDIVIDUAL.

Surgery may be performed using an “open” approach, which involves cutting open the abdomen or by means of laparoscopy, during which surgical instruments are guided into the abdomen through small half-inch incisions. Today, most bariatric surgery is laparoscopic because compared with open surgery, it requires less extensive cuts, causes relatively minimal tissue damage, leads to fewer post-operative complications and allows for earlier hospital discharge.

The most common bariatric surgery procedures are gastric bypass, sleeve gastrectomy, adjustable gastric band, and biliopancreatic diversion with duodenal switch. Each surgery has its own advantages and disadvantages. 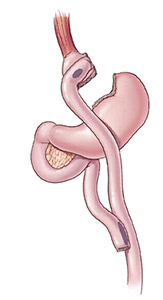 The gastric bypass works by several mechanisms. First, similar to most bariatric procedures, the newly created stomach pouch is considerably smaller and facilitates significantly smaller meals, which translates into less calories consumed. Additionally, because there is less digestion of food by the smaller stomach pouch, and there is a segment of small intestine that would normally absorb calories as well as nutrients that no longer has food going through it, there is probably to some degree less absorption of calories and nutrients.

Most importantly, the rerouting of the food stream produces changes in gut hormones that promote satiety, suppress hunger, and reverse one of the primary mechanisms by which obesity induces type 2 diabetes.

The Laparoscopic Sleeve Gastrectomy – often called the sleeve – is performed by removing approximately 80 percent of the stomach. The remaining stomach is a tubular pouch that resembles a banana. 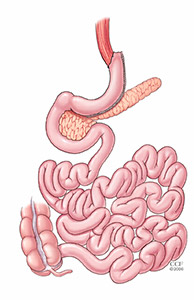 This procedure works by several mechanisms. First, the new stomach pouch holds a considerably smaller volume than the normal stomach and helps to significantly reduce the amount of food (and thus calories) that can be consumed. The greater impact, however, seems to be the effect the surgery has on gut hormones that impact a number of factors including hunger, satiety, and blood sugar control.

The Adjustable Gastric Band – often called the band – involves an inflatable band that is placed around the upper portion of the stomach, creating a small stomach pouch above the band, and the rest of the stomach below the band. 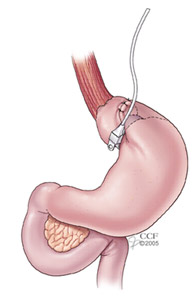 The common explanation of how this device works is that with the smaller stomach pouch, eating just a small amount of food will satisfy hunger and promote the feeling of fullness. The feeling of fullness depends upon the size of the opening between the pouch and the remainder of the stomach created by the gastric band. The size of the stomach opening can be adjusted by filling the band with sterile saline, which is injected through a port placed under the skin.

Reducing the size of the opening is done gradually over time with repeated adjustments or “fills.” The notion that the band is a restrictive procedure (works by restricting how much food can be consumed per meal and by restricting the emptying of the food through the band) has been challenged by studies that show the food passes rather quickly through the band, and that absence of hunger or feeling of being satisfied was not related to food remaining in the pouch above the band. What is known is that there is no malabsorption; the food is digested and absorbed as it would be normally.

The clinical impact of the band seems to be that it reduces hunger, which helps the patients to decrease the amount of calories that are consumed.

The Biliopancreatic Diversion with Duodenal Switch – abbreviated as BPD/DS – is a procedure with two components. First, a smaller, tubular stomach pouch is created by removing a portion of the stomach, very similar to the sleeve gastrectomy. Next, a large portion of the small intestine is bypassed. 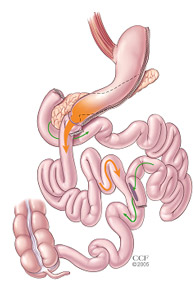 The bypassed small intestine, which carries the bile and pancreatic enzymes that are necessary for the breakdown and absorption of protein and fat, is reconnected to the last portion of the small intestine so that they can eventually mix with the food stream. Similar to the other surgeries described above, the BPD/DS initially helps to reduce the amount of food that is consumed; however, over time this effect lessens and patients are able to eventually consume near “normal” amounts of food. Unlike the other procedures, there is a significant amount of small bowel that is bypassed by the food stream.

Additionally, the food does not mix with the bile and pancreatic enzymes until very far down the small intestine. This results in a significant decrease in the absorption of calories and nutrients (particularly protein and fat) as well as nutrients and vitamins dependent on fat for absorption (fat soluble vitamins and nutrients). Lastly, the BPD/DS, similar to the gastric bypass and sleeve gastrectomy, affects guts hormones in a manner that impacts hunger and satiety as well as blood sugar control. The BPD/DS is considered to be the most effective surgery for the treatment of diabetes among those that are described here.

In recent years, a surgical technique known as single-anastomosis gastric bypass (SAGB) or mini-gastric bypass (MGB) has been developed; its frequency of performance has increased considerably in the current decade. This procedure proposes a simplification of Roux-en-Y bypass by performing a single anastomosis, with a significant reduction of technical complexity, shorter operative time and a potential reduction in morbidity and mortality. Several studies have demonstrated the benefits provided by this procedure, including excess weight loss and resolution of comorbidities equivalent or even higher than those observed after the Roux-en-Y gastric bypass 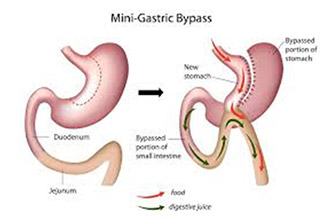 Bariatric surgery has brought a new wave in the science of obesity treatment.  However, all the procedures come with few post-operative and surgical risks and complications:

Death rate immediately after the operation in Obesity surgery is 1 in every 200.